A Taste of Lemmon

My first job for my new company was given to me by Michelle Reese, V.P. Universal Pictures in 1984. Before landing the job I had spent nearly two years knocking on doors trying to prove that my movie star interviews would play on a lot of stations as it had not been done before.

I was so lucky that she gave me Jack Lemmon to interview for the film Mass Appeal. I could not believe that he would share so many personal stories with me. Not only did he let me photograph his baby book, he also revealed to me that he knew that he wanted to be an actor from 9 years old, After he graduated from Harvard he went to New York and started getting very small parts doing live TV. After doing over 100 television shows he went to Hollywood and, as they say, the rest is history. He was nominated for an Oscar for The Days of Wine and Roses and for Save the Tiger, with the latter winning him an Academy Award. He reminisced about his role in Save The Tiger which touched him deeply and made him aware of his own behavior at home. His character had a drinking problem, which was how he dealt with unhappiness. Jack realized that the character was very close to himself, in fact there were moments when he felt that the character had taken over his life. Jack said: “I still like to drink and when I have too much I take it out on the walls and doors of my house.” He went on to say: “I never hit anybody.” Although Jack Lemmon went public with his drinking in the 1960’s, it wasn’t until three decades later that he revealed that he was a recovering alcoholic. I never showed that video with his personal stories to anyone. It’s interesting that his best Oscar nominated performances were for playing characters that were alcoholics.

At the conclusion of the interview he said some wonderful things to me and I said to Jack: “Do you really mean what you are saying?” He replied: “Yes.” I asked if he would put it in writing and he did. After his note arrived, I called his office and asked if I could show it to the studios, the answer was “Yes.” 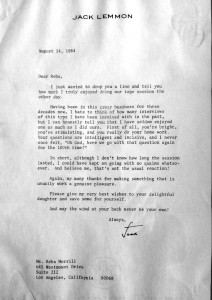 I saw Jack one more time in 1996. when I was doing publicity for the film Getting Away With Murder. I told him that his letter changed my life as it put my career on the fast track. Jack Lemmon was a most charming man who gave so much of himself to others, like me who was just an unknown interviewer. Thank you Jack Lemmon! I am so glad you came into my life, even though it was only for that one day at the very beginning of my Hollywood career…you are a true Hollywood Gem!